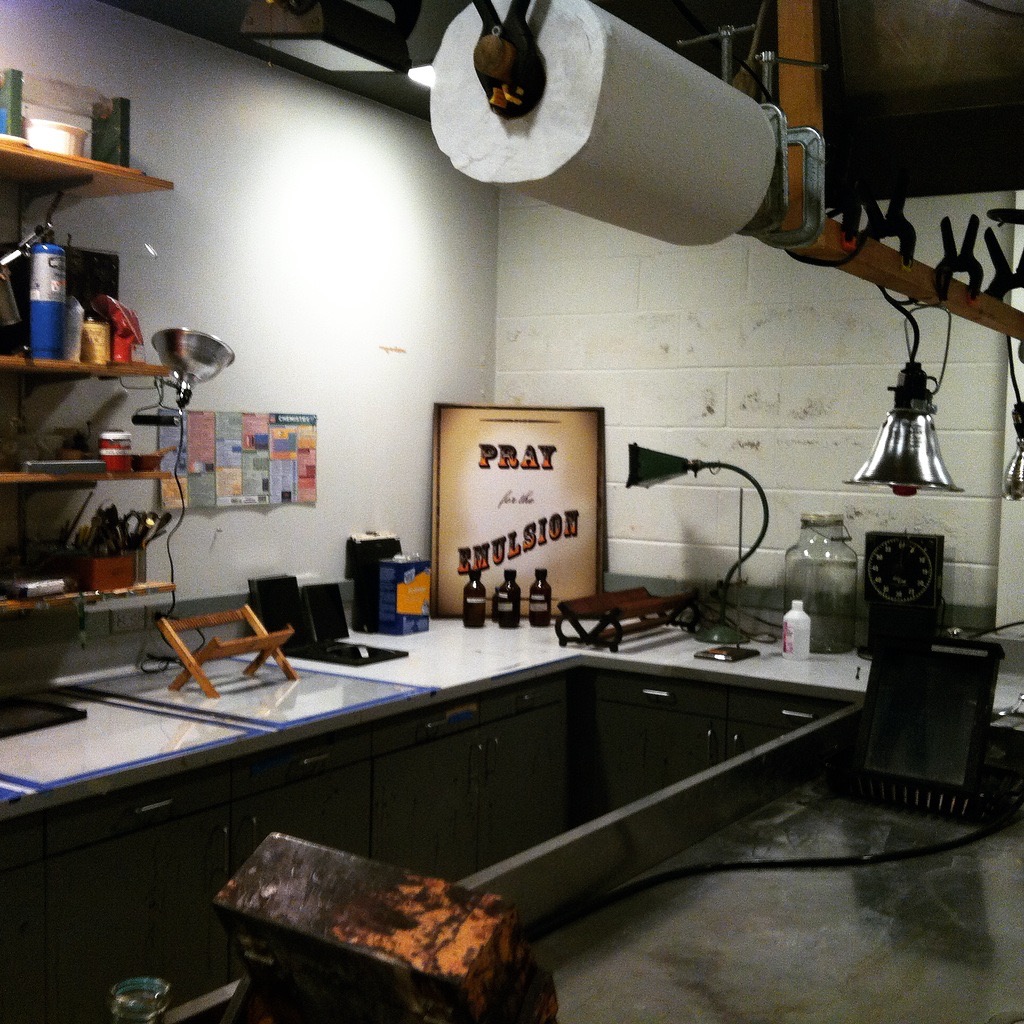 In April 2015 it was *my* turn to get incredibly lucky. With enormous gratitude to the South Australian Arts funding body ArtsSA, I tootled off to George Eastman House in Rochester, New York to undertake a week long Ambrotype and Tintype workshop under the expert tutelage of Mark Osterman. Yes, I do mean THAT George Eastman House – the origin of Kodak and the current home of one of the largest collections of photographic images and artefacts in the world. Pretty Fancy!

After several misadventures on my two day marathon of flights – the last of which was on a teeny tiny plane that flew me over lakes still boasting sheets of ice and some very handsome lighthouses – I arrived in Rochester. Pretty bedraggled, almost certainly smelly, and very excited to be on a new adventure.

Jet lag had me up and excited at a silly hour of the morning. I found some excellent coffee on my nice little walk from my Airbnb host’s house to the Museum. I was very happy to have my New Zealand possum and merino gloves, because although the bulbs were peeping and the bare branches of the trees were budding, it was Cold like I haven’t experienced in a long time. Maybe there’s a theme here with Alex and I both heading off to do special photography things in the frigid weather? It’s probably just a coincidence.

The first half of the first day exceeded my expectations in Every Way. Mark Osterman is very warm and personable and has a generous and easy way of explaining things. I was able to recover from being star-struck pretty quickly (yes, I’m a raging photo nerd and Mark is one of my Collodion Heroes) as soon as we got into the classroom and my thirst for answers overtook anything else.

I’ve been playing with wet plate collodion as a photographic process in my art practice for about two years. It’s a marvellous and magical process – in a sincerely alchemical kind of way (we do use a lot of silver) – but I was at a distinct brick wall working without guidance in Adelaide. I’d had an excellent introduction to the process thanks to local artists Alice Blanch and James Tylor, and I’m very grateful for all their time and patience. I’d learnt a great deal more through my experiments and the experiments of my friends Alex and Andrew. Being connected to the collodion community through the Facebook group Collodion Bastards had also given me some excellent insights. So I had an idea of what I was doing – but not an especially good one.

I spent some time considering which would be the best workshop to take to improve my knowledge. We do have some excellent wet collodion practitioners and teachers in Australia, but when I investigated where they had learnt it all came back to the same place and the same man – Mark Osterman at George Eastman House. Taking a workshop at GEH had been a longstanding dream (and I’d do it again in a heartbeat – there’s so many interesting things to learn!) so I decided to go directly to the source. It was a superlative decision.

As Mark said frequently throughout the workshop – collodion is the only area in photography where people are happy not understanding what they are doing. He then went to great lengths to make sure that we understood what was happening in each of the steps of the process, and how to control our results by varying the ingredients of the compounds we were using. And this was just day one! I was entirely giddy and my cheeks hurt from all the smiling. I discovered that I’d been doing many things incorrectly, and the reason why I’d been having the same recurring problems. We were given ample time and opportunity to practice our techniques in pouring (“maintain the circle!”) dipping, hand development (no tray for you!) fixing (in cyanide… a new thing for me) and varnishing with sandarac. By the end of the week we were all making beautifully clean full plate ambrotypes and tintypes, and able to help troubleshoot and learn from each others mistakes. The end came rushing to meet us much too soon. I made some dear friends from around the world whom all share my strange obsession with this persnipity process, and thanks to the internets I get to see what they are all up to with their personal collodion goals.

During the week we had all witnessed the dozens of photographic and film conservators and conservation students buzzing about the place – going in and out of doors that surely led to mountains of photographic treasure. Our classroom alone was lined wall to wall and floor to ceiling with beautiful and rare photographic books (including a first edition copy of The Silver Sunbeam!) On the afternoon of our last day we were treated to a special viewing of some exquisite, rare or unusual examples of ambrotypes and tintype from the Eastman House Collection ( which we were not allowed to photograph 🙁 ) and then a chance to see some examples of 19th century cameras and lenses. It seems that in the early days of photography, almost every photographer cobbled his equipment together out of the bits he had. There were some marvellously clever cameras, and some too clever to be actually functional. In a rare and surprising series of events one of the workshop participants scored us a tour of the Vault, a giant underground temperature controlled and dust free bunker of the Eastman House collection of photographic devices. It was a religious experience (I am not exaggerating one little bit). I can’t even begin to describe my awe in being in that place.

As a secret little bonus to the workshop that comes from being in that one very particular corner of the world – we had a chance to go antique shopping for tintype and ambrotype treasure! There were many ambrotypists and tintypists in New York State in the late 1800’s – consequently there are many fine examples of each to be found in the local antique markets at prices that made me giddy. I started what I hope will be a very interesting collection of bon ton tintypes of children with dolls and musical instruments, and groups of young people Having Fun. I had no idea it was possible for people to look like they were having a good time in an original tintype photograph!

And as icing on the cake because Alex has been so busy being internationally awesome for the last few years he couldn’t even pout about me going off and leaving him to mind the ship.