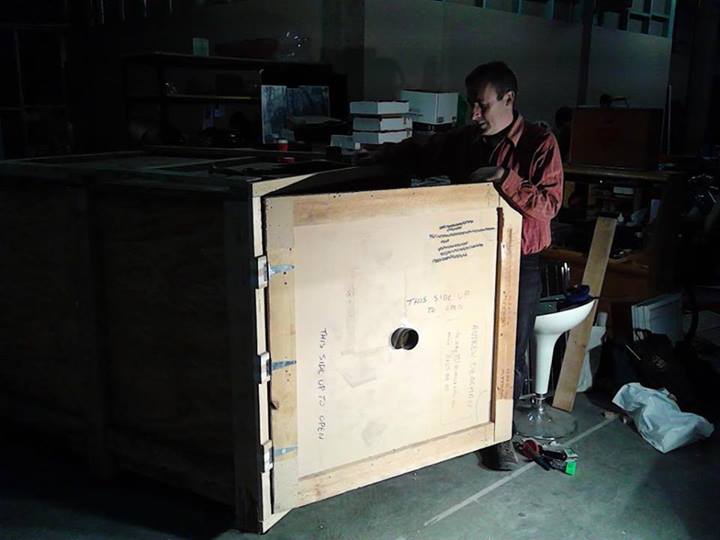 Our friend Andrew Dearman is a genius.

Like a proper one, with all the brain smarts and things.

Andrew lectures in Art History and Theory at all three of Adelaide’s art schools (The South Australian School of Art, Adelaide College of the Arts & Central School of Art) but somehow I got through all of my undergraduate studies without ever having a class with him. I had friends who did, and he was their favorite for knowing what he was talking about and sincerely trying to get them to know what they were talking about too. He also made frequent cheese analogies in class. There was this one story about a time he dressed as a wizard…anyway, I digress.

Andrew also loves photography and making things. This makes him one of the best people to spend a lazy Saturday down at the lab with, drinking tea, eating biscuits and mucking around. Andrew’s latest project is building the biggest camera you’ve ever seen.

When we built The Analogue Lab, our ducting (very generously donated by Ductware) arrived in a giant crate. That’s Andrew there somehow giving four thumbs up at once. After we took all the ducting out, Andrew decided to keep the box – so he pushed it into his studio, where it took up about 80% of the space.

He then put a door on it and a lens, and then, because he is a genius (see above), wheels.

One weekend we proceeded to push it outside, get in and take some digital photos of the 40 x 40″ image cast on the back wall. 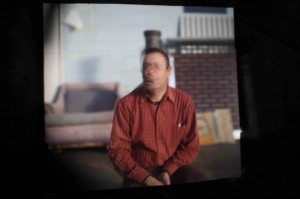 And, well, then we got a little excited and decided to see how a paper negative would work. So we ran inside, got an old box of 12×16″ RC paper, crawled in and stuck it up with masking tape. 5 seconds later we had an image, back to the lab to process it and –

Andrew works with paper cutouts and dioramas in his practice, and he intends to use The Crate Camera for making giant Wet Plate Collodion photographs of these constructions. He made his first successful tests last night.

Our friend Andrew Dearman is amazing.

(Most photographs courtesy of Andrew Dearman, who really does need to get a website one of these days, with a couple from Aurelia and me.)

2 thoughts on “Andrew Dearman and The Crate Camera”